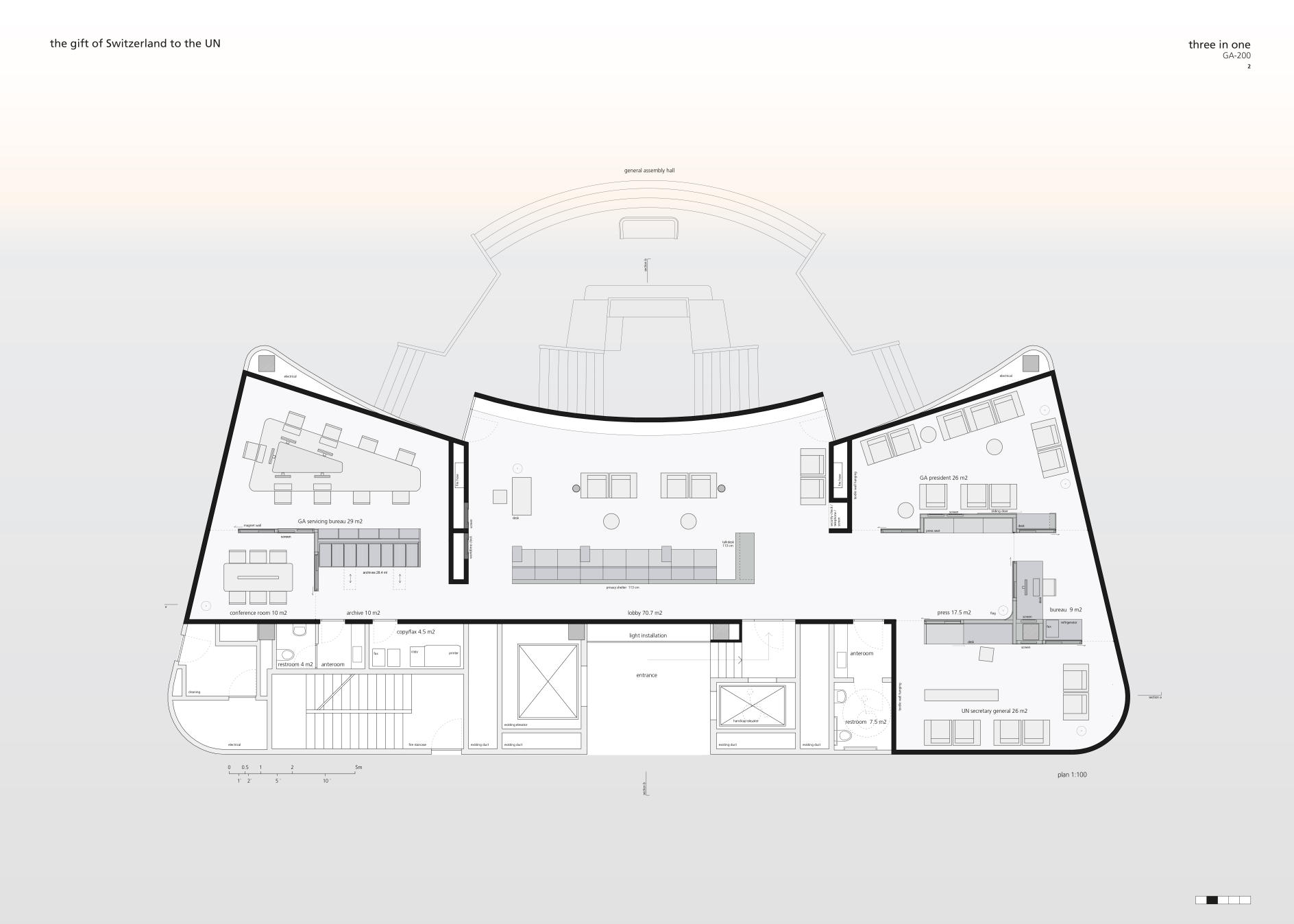 The program defines all the boundary conditions concerning the measurable facts, such as the existing technical data, the size of the desired functional spaces, the available budget and the time allowed for the construction. But to arrive at an architectural concept, one has to consider first of all the spiritual boundary conditions, which, even though they are not measurable facts, may be of even greater importance.

A gift involves a donor and a donee. In the donor country of Switzerland, the sovereign is the people. Our sovereign is made up of two parts - the majority and the minority. In our tradition the minority report must be respected by the majority, and vice versa. Our sovereign took half a century to agree to become a member of the UN. We are happy that the latecomer was gracefully accepted. Because of the complex personality of our sovereign, the traditional gift of the new member of the UN must be of such a quality that also the minority part of the donor country will joyously respect its significance The gift must be useful to the donee and at the same time must express the beauty of calm restraint. For our part, we are convinced that a gift wrapped in this spirit will be joyfully accepted by the highly respected donee.

As with any architectural concept, also in the design for our small “three in one” we needed to equilibrate our dream with the realistic possibilities.

The general lighting of GA 200 will be reflected light from the lightly coloured walls, defining the space in its entity. Because of the small size of all the rooms defined by light secondary space-dividers, the intensity of the general lighting is sufficient even for the office spaces.

Lighting tubes are placed above continuous translucent panels of such a quality as to bundle and direct the light to the surface of the walls. Only the curved wall – the backside of the General Assembly Hall – is not washed with light from above. The same lighting system is used to light the wall from the gap between the flooring and the wall. In this subtle way the nearness of the monumental main space is marked in the lobby.

Secondary light sources are integrated into the prefabricated light secondary space-dividers. Writing surfaces, sources of reading light for visitors seated on benches in the lobby and the lighting of display vitrines are possible.

The lighting concept is an integral part of the architectural concept. It begins with the light installation marking the new entrance. There the colour of light announces the ambiance of the interior with its reflected light from the surfaces of the walls whose mere hint of colour contrasts to the bright green carpet and the anthracite grey ceiling grid.

The architectural Introduction concept
The existing GA-200
The off-centre new entry has many organizational advantages, but mainly, it underlines the spatial concept in which we want to give due emphasis to the cylindrical surface of the backside of the General Assembly Hall. This wall is the major element one grasps visually when entering the space.
Existing and new walls defi ne the space. The plan 1:200 given in the program to defi ne the perimeter has a suggestive power, even though it has something in common with the small print on insurance contracts. The left side shows the impurity clearly, but the small As Bs and D become very powerful upon closer inspection. Accepting the small print as part of reality, we had to re-dimension our dream. The plaster walls together with the openings in between create the desired spatial continuity and articulate the importance of the backside of the gilded wall of the General Assembly Hall.
The green carpeting is a strong element to underline the spatial continuity and also to make GA 200 part of the whole UN
The anthracite grey ceiling grid is not only another element to underline the spatial continuity but also helps us to hide the necessary technical installations.
The prefabricated light space-dividers are built up of drawers, cupboards, shelves, benches and writing desks. They are of high quality Swiss craftsmanship designed to be shipped to the US in standard aircraft containers.
Juxtaposition of 1 – 6

Concept regarding colours and materials

The entrance to GA 200 is marked by a light installation mounted in front of the back wall of the existing niche between the elevators. The colour of light has the quality of an early morning sunrise reflected on snow.

The plaster wall defining the interior space is of the same colour as the light marking the entrance. The pigment is brush-applied watercolour over a flat white grounding. It is a whisper of colour in tune with the floor and ceiling.

The green floor and the anthracite grey ceiling grid are important parts of the colour concept.

The insides of drawers and cupboards are of intensive blue, red or yellow colour, coming to view only when the drawer or cupboard is opened. The inside colours are distributed at random.

The furniture has a shiny chromate tubular structure. The upholstery is of charcoal coloured textile or leather.

Art work: In the two reception rooms, we envision two different but related textile wall hangings on the walls adjacent to the doors. The pieces are to be created by a Swiss artist. Design and execution will be in close collaboration with the craftsmen of a leading Swiss textile manufacturer.

The colour and material concept must be seen as an integral part of the architectural concept. From experience we know that fine-tuning is necessary to create the ensemble founded on the spiritual basis we mentioned in our introduction.

The materialisation of the restroom (all American standards) is in light grey glass mosaic, doors in light grey hardboard. Mirrors from floor to ceiling in the anter oom, the wash-basin is in black granit. 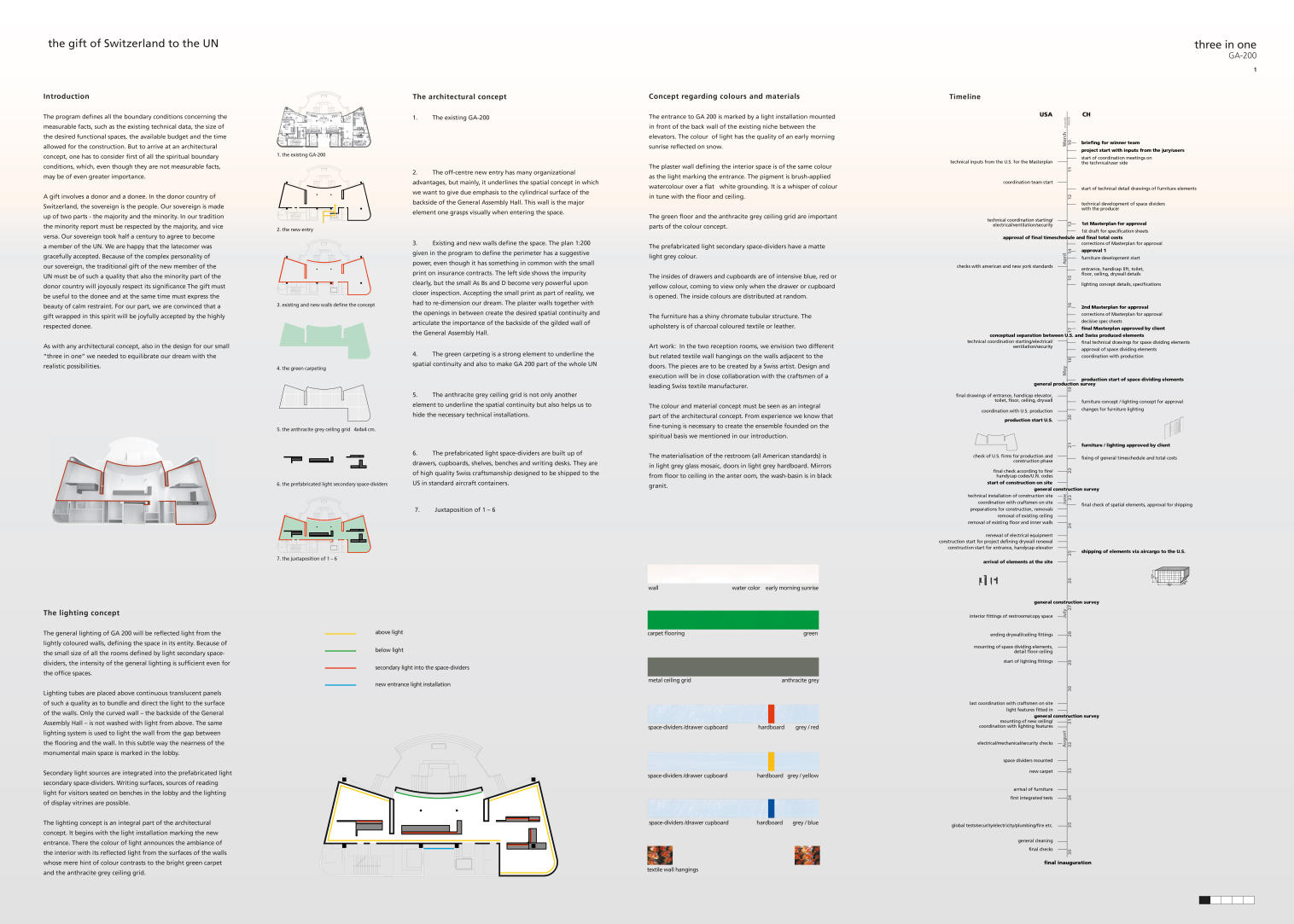 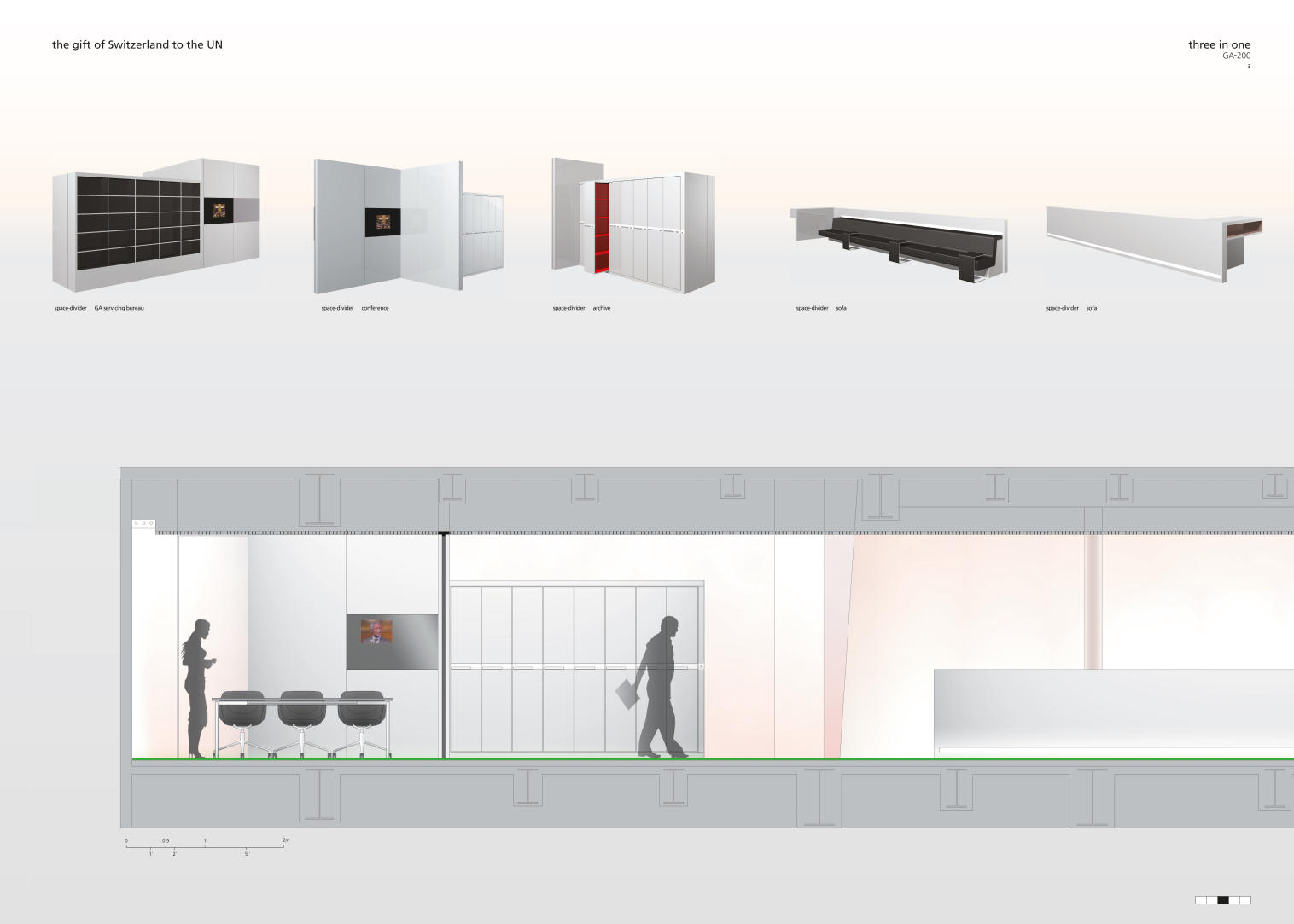 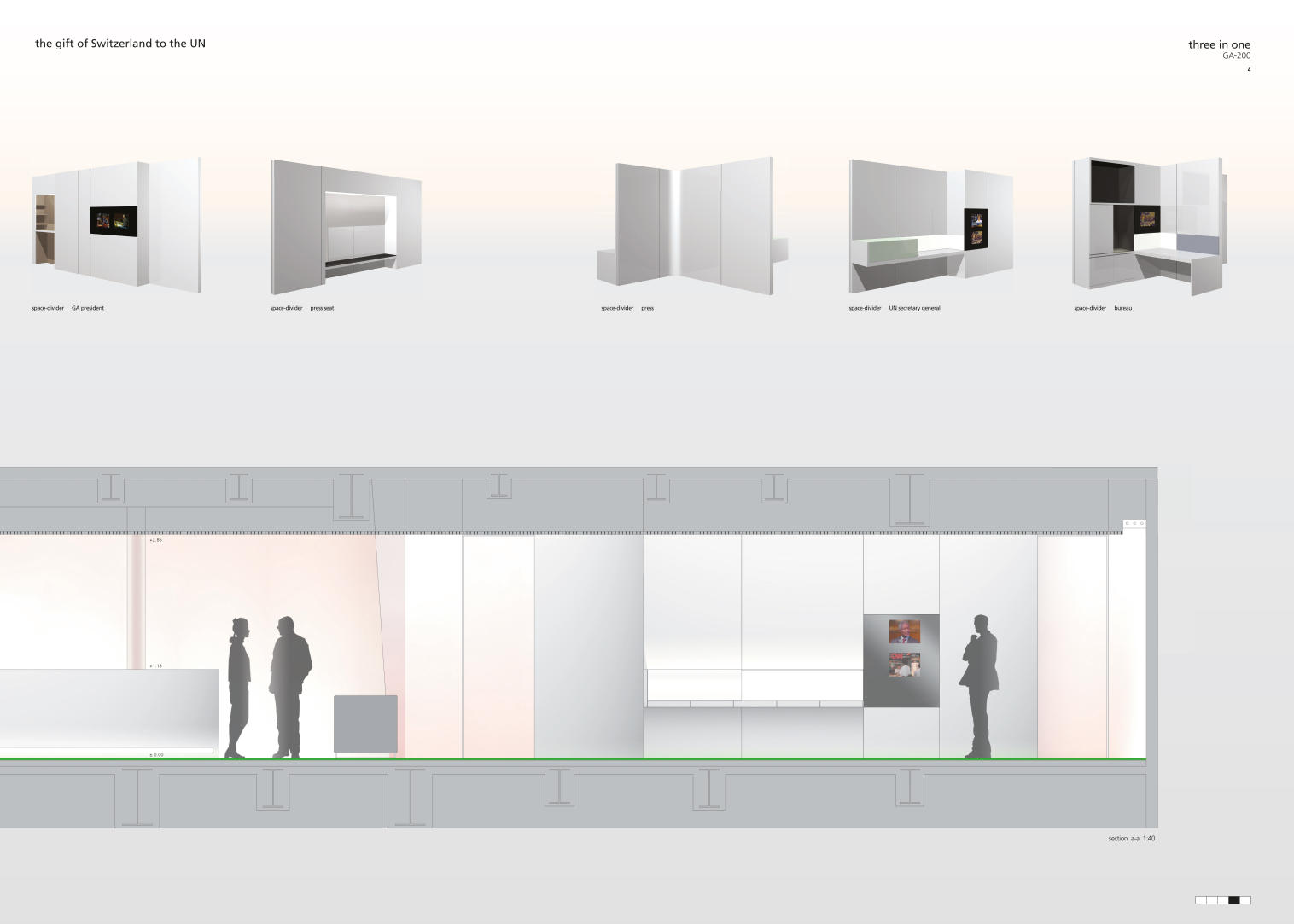 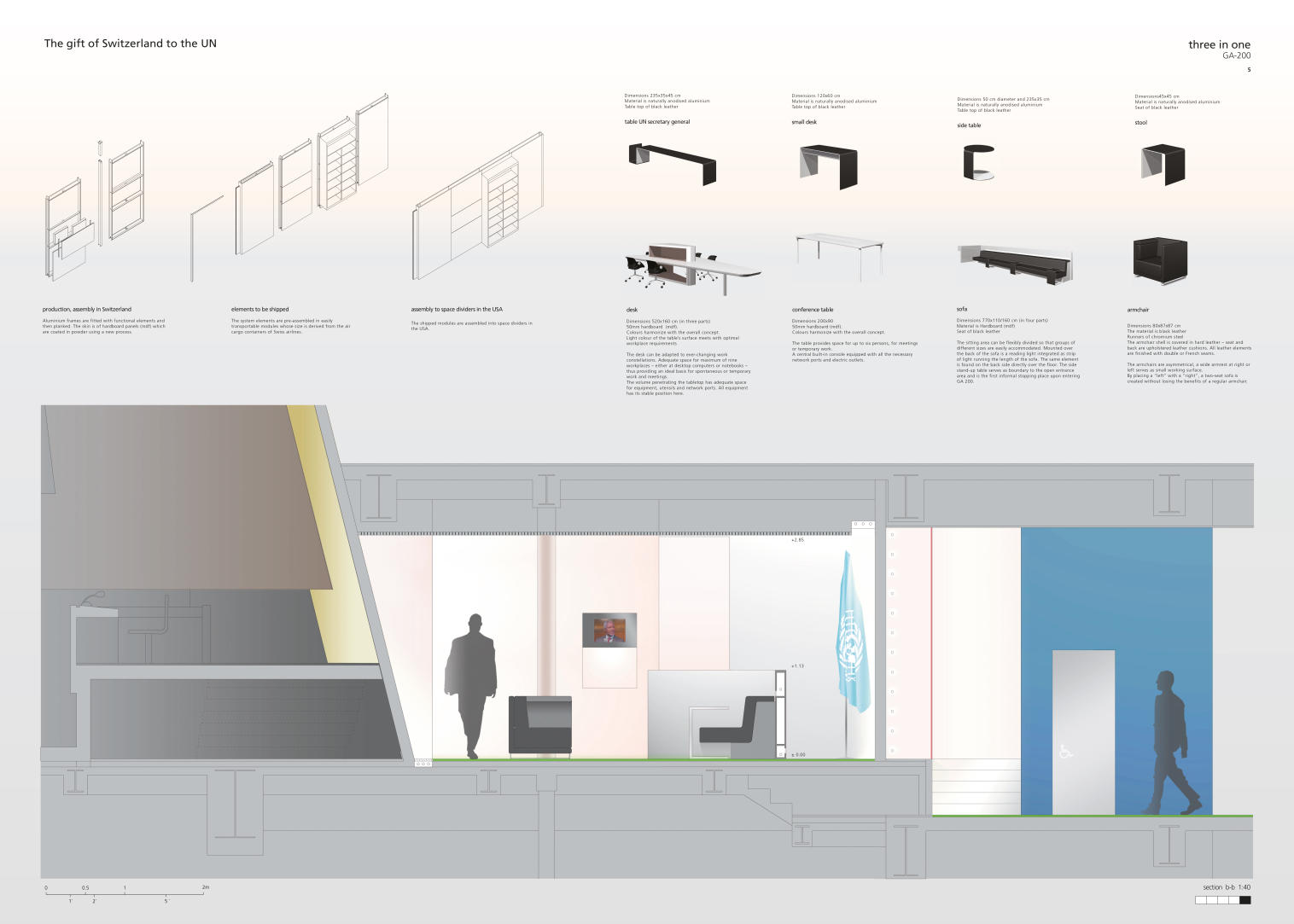